Our station on SE 49th Street was badly damaged during and after Hurricane Isaias. As most Oak Islanders know, the storm hit as a Category 1 hurricane with 85 MPH winds. Because of it’s relative weakness, most of us were not very intimidated or alarmed by this storm. But it has often been said that the category of storm, which only measures wind speed, is a poor barometer of the impact and damage it can do. We saw this with Hurricanes Florence and Matthew as well, both Cat 1’s that did substantial damage. But Isaias was different, and far more destructive for Oak Island.

The storm put Oak Island in the Northeast quadrant, often the most violent part of a hurricane. The winds were coming out of the south, pushing all the water and surge onto land. We were hit with both eye walls, at high-tide, during a full moon, which would have already caused King tides without a hurricane. It literally was a perfect storm, and allowed a weak hurricane to inflict serious damage to our island.

As with all hurricanes, Oak Island Water Rescue moved all of our boats, trucks, and rescue gear to safer locations around the island before the storm hit. Our station is very close to the beach, which of course allows us to respond to calls quicker, but is located in an area subject to flooding, especially during strong storms. The station saw 3-4 feet of water, far more than ever in the past, throughout the building. It destroyed all of our furniture, tools, clothes, appliances, office, electrical system, walls, etc. In addition, large objects floated in the flood waters outside the building, repeatedly crashing into and destroying the garage doors.

At no point were we unable to respond to emergencies, though our response time would have been longer. We had to make changes to our response protocol to account for the boats and trucks being in different locations, the inability to meet at the station, and of course the widespread destruction the island experienced. We are still using a modified response due to the damage and recovery efforts in the evacuation zone, from SE 40th Street to The Point.

We do have insurance and the claims adjuster has already been out to account for damages. To save money, our team members have been doing a great deal of the work themselves, something we take a lot of pride in. We always try to use your generous donations as carefully as possible, and have a team with very diverse skills that all manage to work great together. With few exceptions, we have the skills and talent required to tear down and rebuild the station. But we have a LOT of equipment to replace. Your donations during this difficult time are especially appreciated!

As for our primary objective, which is always saving lives, we are 100% ready and capable of responding to emergencies in a timely and efficient manner. This does not mean our responses will be as fast as normal, since substantial sections of the island have impassable roads or other obstacles that will require us to take the long way to a scene. But we are as good as we can hope for, and will continue to get back to normal as the island recovers from this storm. 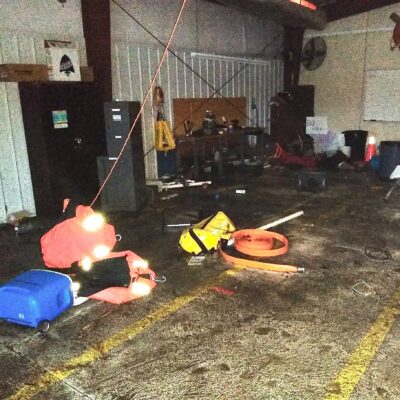